The Supermoon And The Smiths 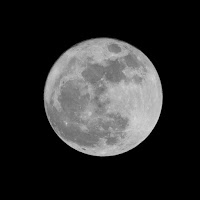 On March 19th, a full moon of rare size and beauty rose in the sky, the biggest in almost 20 years. This moon, bless it, has been getting the blame for certain occurrences around the world such as the Japanese earthquake and, erm, five ships getting stranded near the Isle Of Wight. It has amused me because journalists have had to use the terms 'perigee' and 'apogee' in sentences, when anybody with an interest in horoscopes knows these are totally made up words.
The supermoon got my children very excited when I explained to them what they were going to see. We all waited with great anticipation for it to go dark. However, as usual, the kids reactions weren't what I had expected. They were utterly disappointed that:
a) They couldn't jump over it (like cows, apparently).
b) It didn't make their hair stand on end with its super strong gravity.
c) They could look at it with their naked eye and not go blind. Plus 3d glasses were of no use.
I have been defending the supermoon. I have heard people blame it, hope their lives change because of it and suggest that it marks the End Of The World. I've been thinking that it's all a load of rubbish. The supermoon should be taken for exactly what it is - lovely but forgettable - pretty much like a one night stand. Neither the supermoon or the human race should have any expectation or intention that the relationship will be extended beyond the sole encounter.
However, since this morning my opinion has changed. My one night stand with the supermoon is in question and I am in celestial turbulence. What I thought was a casual engagement may actually be the start of something more serious. I've realised that the supermoon has coincided with a series of events, prompting me to acknowledge that rather than simply controlling the tides, the moon is, in fact, responsible for happenings in my household. To illustrate:
A) The Toddler has learnt how to open the freezer. Which normally wouldn't bother me except he has become obsessed with the frozen peas. On Sunday, he managed to rip the packet open and spill peas all over the floor. This is the result: 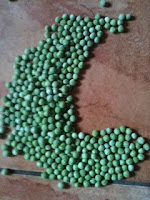 The moon is not made of cheese, it's made of PEAS

B) The moon controls my bank balance. Its gravitational pull has sucked all the money out of my account. I have managed to spend over a hundred quid since Saturday and I've not even been anywhere. Although I did overspend a bit on moonpig.com.
C) The Dog, who has not chewed anything for a while except sticks, decided to have a go with my bag. It's GUCCI for Christ's sake, and I bought it in Monte Carlo. It makes me feel like I too can have star potential. 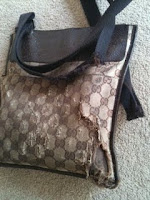 The rip, with its 'tail' looks slightly like a shooting star if you squint a bit
D) The moon takes just over 27 days to complete its orbit around earth. And it's normally every 27 days that The Husband questions what I do all day. But since the supermoon, The Husband has had not one, but two Talks with me about what the heck am I doing on a daily basis. The Husband has clearly been showing his dark side. His behaviour causes my mood to wax and wane.
E) The moon is the only celestial body on which humans have landed. There are many conspiracy theories surrounding the lunar landing and there are many theories as to whether The Tomboy is really a girl or a boy. The Tomboy being female could be a very good hoax. (Okay, so I'm reaching for the stars a bit with that one...).
Well this might seem like far-fetched astrology to you, but to me it's pure science. It goes against everything I believed in before, yet my findings are based on fact not fiction.
And, if you're still not convinced, remember I am much more likely to tell you the truth than NASA.
(Fab moon photo taken by David Turner)
Posted by Claire