Hair - Not The Musical

There are different opinions in this house when it comes to the subject of hair.

I cannot, will not, leave the house without my hair straightened. If this means ignoring the children killing each other and burning The Toddler with my GHDs while he clings to me, then so be it. I once didn't do it because I was going straight from the school run to walk the dog in the rain and it's not an understatement to say that I frightened a number of small children. 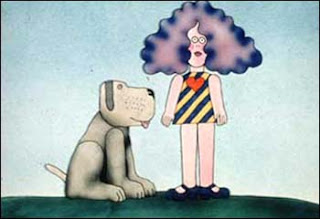 Me without the wonder of GHDs

Hair has become an issue recently. Firstly, I got The Toddler's hair cut because it's his christening next week. Nobody has RSVP'd to the invites I only remembered to give out yesterday, so it's not gonna be that much of a special occasion. But his hair was getting a bit too much HughGrant-like so I got it lobbed off. He has gone from floppy blonde cutie to bad boy with rubbish hair overnight. He has had a short back & sides and looks like he has been sheep sheared. I was thinking of getting the barber to do 666 in tramlines on his head but didn't suppose that would go down too well with the Rector.

The Tomboy is obsessed with getting her lovely long locks cut into a skinhead. At every opportunity she will tuck her hair into a hat. She says "Because I've got long hair, people think I am a girl". I say "But you are a girl, you don't have a willy". She says "I am growing one so I need my hair cut". Mmmmm not sure how to parent this one.

The Tweenager wants to grow his hair long. His mop is currently at that in-betweeny length so it looks like Lego hair. I have bought some pinky coloured hair bands and left them in his room but that hasn't deterred him. I tried telling him that I don't like boys with long hair and he replied "Well then that means you don't like Jesus." Last night he ate his dinner as if it was The Last Supper. He told his siblings "This is the very final time you will ever see me with hair this long" to which there was a minute's silence, before I reached for the hair clippers.

You can see why this mum is starting to suffer from grey hair, can't you.