They Are Out Of School But I'm Still Learning

On Thursday I took the kids to London Zoo. Every now and again I feel the pressure to do something 'big' with them as it makes me feel better about being such a boring parent. I'm thinking that going to the zoo will make up for all the crap I usually force them to do in the school holidays such as walking the dog, trips to Sainsburys and waiting for me to get off the phone.
I cleverly met a friend who only has one child because I figured I could palm at least two off on her with the excuse that I was dealing with The Toddler. Bless her, she totally cottoned on, but was so goddamn sweet about it that at the end of the day I was practically begging her to let me take her son for the rest of the hols.

Anyway, I have learnt a few things as follows:
1. Never ever take your kids to London Zoo. It's a wonderful place but it bloody well costs a fortune. It was over 45quid just to get in, £13 to park and £15 on petrol. That was before we'd even seen any animals. Of course I didn't take anything to eat except a bag of crisps for me so it was a further £6 on rubbish chips. Ooooo and London Zoo are very clever because they tempt children away from the animals with bouncy castles, slides and facepainting which of course parents have to pay for. Plus I would like to find the man who installed the toddler helicopter ride by the monkeys, he owes me £4 in 50ps.
2. Never ever take your kids to London Zoo unless you want to see more than you expected. And you have to answer questions about stuff like this: 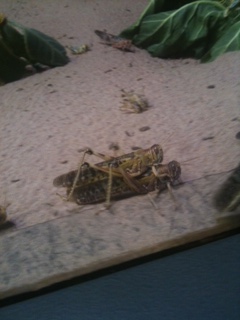 3. Never ever take your kids to London Zoo and expect them to be grateful. We were there for five hours, they had sweets, they had ice cream and yet at the end of the day they said it was boring and please could we go to the park.
4. Never ever sit near the clearly marked toilet area in the Animals In Action display. Unless you want your Tweenager's coat to be permanently stained with parrot poo.
5. Do not be surprised when your daughter is mistaken three times for a boy. Especially when she has tucked all her hair into a flat cap and is wearing this stunning outfit: 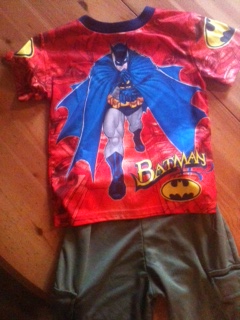 Apparently the Zoo are planning a Tomboy Enclosure for 2012
Fortunately, I did learn something actually useful and that is Symbiosis. Which is the living together of different species. Like between the yucca plant and the yucca moth - the insect fertilizes the plant and the plant supplies food for the baby moths. Neither can live without the other and it is basically what goes on within my family between the adults and the children.
Symbiosis can be divided into three main categories which can be illustrated within the Smith Animal Kingdom. I tried to explain this to the Zoo Keeper heading up the talk, but she looked rather like she wanted to put me in a cage with the chimps.
PARASITISM is what goes on between The Husband and Me. The host (THE HUSBAND) is always being exploited in some way but so slowly that the host's health only deteriorates little by little, meaning that the parasite (ME) can exploit over a long period of time. The parasite only spends a portion of its life in the relationship, usually to reproduce.
MUTUALISM is when both parties benefit and that is between Me and The Toddler. I constantly use The Toddler as the reason why I am not getting off my backside doing anything worthwhile and he therefore gets to spend quality time with his mama. We are both very happy within our set up.
COMPETITION is where both are harmed which is pretty much what goes on between The Tweenager and The Tomboy. For example, when two trees grow closely together and compete for light above ground, each therefore gets less light so they don't perform as well as if they grew on their own. I don't really need to explain that any further.
Anyway at least that's my good parenting deed done until the summer holidays. I'm not looking forward to the next trip out but I can't wait to see what I'm likely to learn. In the meantime, I'll carry on living in the zoo in my own home.
Posted by Claire