There came a point yesterday where I had to ask my mummy friends on Facebook to stop bragging about what a lovely Mother's Day they were having. You see after my coffee in bed (cold, brought by The Husband) and my toast (cold, ate by The Toddler), it wasn't really a day to remember. I reminded the kids that they had made me cards at school. The Tweenager's was the best, he had written a poem which included the lines: 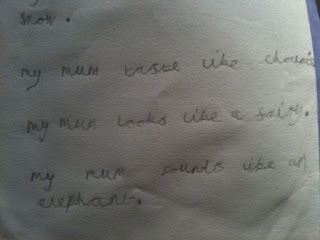 I am quite often heard trumpeting around the village in a tutu
﻿
The Husband was in a wind-up mood. He thought he was being hilarious when, in fact, he was being a pain-in-the-ass. His contribution to Mother's Day was giving me some flowers from Asda (reduced now £1) and talking me through what I had contributed to our three children:
We had the usual bickering, wrestling, answering back, stroppiness, crying, foot stamping, sarcasm and parenting pearls of wisdom from me. Maybe Clintons should stock up on "Happy Same As Every Other Day" cards.
.
Posted by Claire